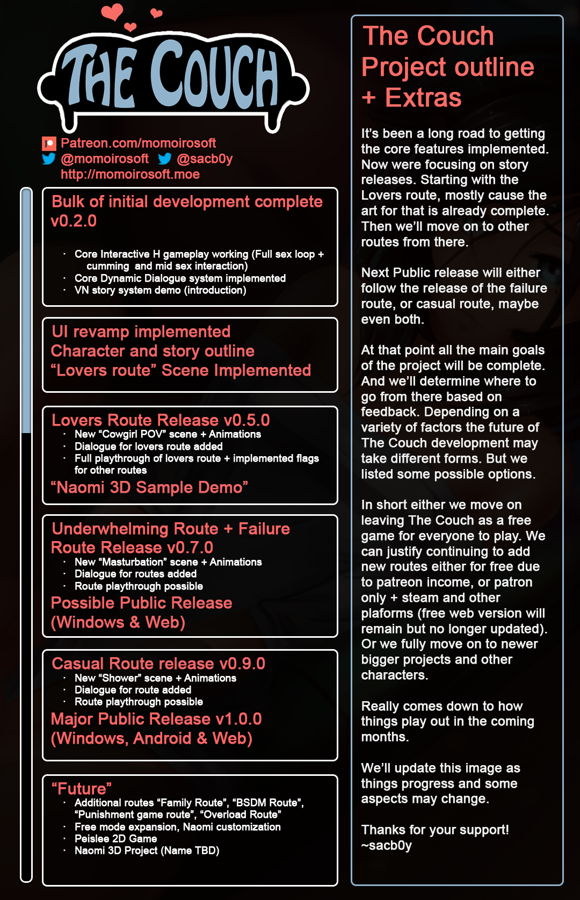 While this outline focused mostly on The Couch it includes plans for other projects too that should come out around a similar time frame.

As you can see the objective for the next main build release is with the lovers route added meaning the full gameplay loop would be possible. For now any ending you get that's not the lovers route will likely display some kind of coming soon screen.

The goal for this release is the end of this month baring any issues with the route triggering system, at the very least though expect the new scene to be animated and implemented.

There will be a build release soon featuring most of the new UI for you guys to test out.

My objective for the next public release is honestly what i would consider a complete game. A great ending, a good ending, a average ending, a failure ending. I'm mostly interested in getting a more complete experience out for public releases so people can expect quality when we release things.

While I may do a public release before the "casual" route, the casual route implementation is the true completion of the game.

As mentioned in the outline image, the future of the couch depends on a variety of factors. For now our goal is getting what we would call a complete game out there so everyone knows what we're about.

But still we need to determine if just the patreon income is enough to keep us going releasing further updates for free. Or even Steam or placing a fee on any future updates is more ideal to further expand the game. In that scenario the version of The Couch released on new grounds and for free on itch.io will be the final free version, and all future updates will be patron only, and steam/paid only. Adding more routes, adding non-story related content to the "free mode" including new sex interaction, backgrounds, and customization of Naomi changing outfits or hair style or adding puppy ears and such.

Beyond that is determining which projects we'll focus on, with a game set for a new character called Peislee, and Naomi's 3D game. Where we go will depend on a variety of factors. Naomi's 3D project has major implications expanding the ground work of The Couch to something larger (from a couch to a room). And Peislee's project would just be more of The Couch with a new character.

I'd appreciate any feedback on this, or the outline, but expect some polls in the future on different things.

Thank you for your patience and support!

Oh, I'm liking this veeery much.

But still, I seem to be missing something, and it may seem stupid, but... why is she "dishonest"?